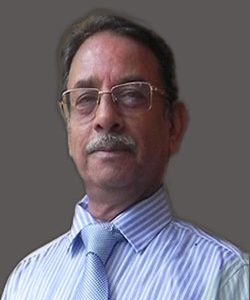 CVR is always witty and humorous in sessions and those who know him, look forward to his anecdotes that have a punch on the subjects he handles. His command on English, Hindi, and several other languages like Telugu, Tamil and Punjabi enables him to establish a rapport with the participants in his seminars with ease in any part of the country.

CVR, after completing his Master’s in Economics from Kurukshetra University picked up his first assignment with the National Productivity Council as an Assistant Director (Research) in 1974. After a brief stint in Economic Research he took over the mantle of NPC’s prestigious quarterly Journal ‘PRODUCTIVITY’ and edited it for nearly 7 years. He was also involved with several national level seminars on Spare Parts Management, Energy Conservation, Prices and Incomes and Wages Policy, etc. He was also associated with the National Productivity Awards and acted as a secretariat for three years. His other assignments have been to head the Supervisory Development wing of NPC, consulting and training in HR. His clients were from public and private sector companies.

He became Director and was a part of Inter Firm Comparison & Benchmarking. This enabled CVR to get baptised to Quality in 1984 with the Quality Circles gaining popularity in India and then the ISO 9000 wave in 1989. CVR became an Assessor for ISO 9001 and was trained by P E Batalas, UK. Since then he has become quite passionate about Quality and to this day he claims to be a student of Quality.

CVR joined CII and went on to become Senior Counsellor in the TQM division of Institute of Quality, CII Bangaluru. During the last 12 years, CVR has been associated with Business Excellence framework (CII has a prestigious award known as CII-EXIM Bank Award for Business Excellence based on EFQM Model). He has assessed more than 35 companies across India. He has been responsible to conduct in house Seminars for Assessors, facilitate Application document preparation with many public and private sector organisations, lead teams of Assessors for assessments, etc. He has also been associated with HR Excellence and Healthcare Excellence also.

CVR has been a member of the jury for Quality Circle competitions (in house) for many companies like Samvardhana Motherson Group, BEL, NTPC and CII.

CVR’s competence is in the area of Strategic Management and Policy Deployment and has assisted organisations to develop systems and processes across the supply chain. He is well versed with operational and manufacturing excellence—systems, processes and tools.

CVR has conducted more than 150 seminars and attended by more than 5000 people. He feels privileged and success gained urges him to keep going with the same passion and energy levels. Rightly then, he sometimes says that conducting seminars is in his DNA.

Some of the companies he has conducted Seminars are